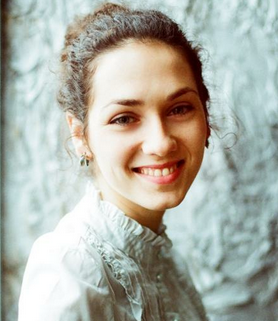 Masha Shumatskaya, who fled the violence of Donetsk, Ukraine, in 2014, will share her moving story at the next Women's Division Lunch & Learn.

With Donetsk now in the hands of pro-Russian rebels, Masha lives in Ukraine-controlled Kharkov. There, despite the ever-present worry for her parents, who remain in Donetsk, Masha has continued her personal tradition of being a vital and vibrant member of the local Jewish community.

As soon as she arrived in Kharkov, Masha contacted the Hesed welfare center and began phoning elderly Jews who were stranded in Donetsk and the war-torn city of Lugansk to assess their needs during the ongoing conflict. Since then, she has initiated a special project in Kharkov – a replication of one she started in Donetsk – through which she has raised money and recruited volunteers to take food baskets and small gifts to seniors on the eve of the Jewish holidays.

Being actively involved with the Kharkov Jewish community is a wonderful outlet for Masha, who attended Jewish schools in Donetsk from the age of 7. She also belonged to the local Jewish youth club and it was as an activist in JDC’s Metsuda young leadership development program that she pioneered the initiative for visiting the elderly as well as a project for teenagers.

In addition to her communal work, Masha is a private English tutor, having taught English at the Donetsk World Center language school. She earned a B.A. and an M.A. from Donetsk National University, and speaks fluent Russian and Hebrew in addition to Ukrainian and English.